After years in the dark, Gaza’s power woes ease

Israel-Hamas deal allowing Qatari fuel into Strip more than doubles the number of hours electricity is provided per day, allowing businesses to operate longer
The lights are going back on in the Gaza Strip, in a rare piece of positive news from the blockaded Palestinian enclave.
In recent days, residents say they have received up to 16 hours of power from the grid per day, compared with as little as four previously.
UN humanitarian officials report an average of between nine and 11 hours per day since October 25.
It is the result of a landmark six-month deal, part of efforts to end unrest along the border between Israel and the Gaza Strip that has raised fears of a fourth war since 2008.
The deal emerged amid ongoing indirect negotiations between terror group Hamas, which rules the Strip, and Israel, mediated by the UN and Egypt, in hopes of reaching a long-term truce. 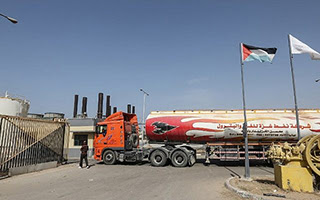 A tanker delivers fuel to the Nuseirat power plant in the Gaza Strip on October 24, 2018.
(Mahmud Hams/AFP)

The fuel agreement, whose first deliveries arrived on October 9, has provided the most power to Gaza residents in years.
The tentative results are showing in the enclave’s beleaguered economy: companies able to work longer, restaurant costs falling, and even an increase in ice cream.
AFP
Den 08 november