Dear friends of the Palestinian people

Israel just announced its plans to raze the historic Shuhada Street market in Hebron to build a new Jewish settler neighborhood on top of its rubble.
It’s a disgusting political move by (interim) Defense Minister Naftali Bennet to win support for ultra-nationalist parties with yet more elections potentially on the way.

But make no mistake: this is ONLY happening because the Trump administration just proclaimed that Israeli settlements in the West Bank don’t violate international law.
The clock is ticking – the community has been told it only has till Dec. 31 to “comply” or face the consequences – and we need to help create a huge public outcry against this atrocity: 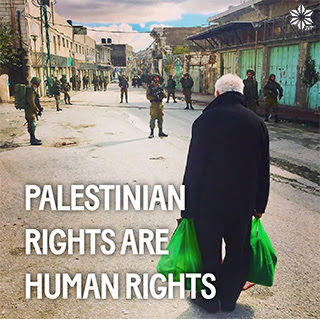 Shuhada Street was already a glaring and painful example of Israel’s apartheid policies. 20 years ago it was the bustling busy commercial center of Hebron – now shops are shuttered and welded shut, entrances to homes are bricked up, and cars are banned.
Why? Hebron is home to a few hundred notoriously militant radical Jewish settlers, and – you can’t make this up – after a Jewish settler massacred 29 Palestinians in 1994, it was Palestinians living and working on Shuhada Street who were forced to leave their homes and businesses in the name of “security.”

25 years later the Israeli government is taking yet another step in its apartheid control of Palestinian lives in Hebron.
Join our campaign in solidarity to create a huge international outcry against this outrageous decision:
Add your name: Stand with Shuhada Street
Den 12 december