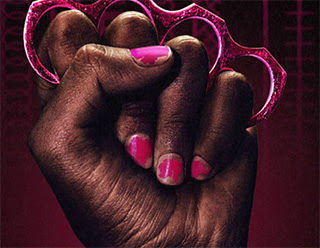 Check it – Acceptance is worth fighting for
CHECK IT follows a group of African-American gay and transgender youth in one of Washington D.C.’s most violent neighborhoods who started their own street gang for protection after being subjected to constant torment and assault. Now in their twenties, the leaders of the gang are struggling to break free from the cycle and violence and poverty they've grown up in by creating their own fashion label in a bid to find a way off the streets.
At first glance, they seem unlikely gang-bangers. Some of the boys wear lipstick and mascara, some stilettos. They carry Louis Vuitton bags, but they also carry knives, brass knuckles and mace. As vulnerable gay and transgender youth, they’ve been shot, stabbed, and raped.
Once victims, they’ve now turned the tables, beating people into comas and stabbing enemies with ice picks. Started in 2009 by a group of bullied 9th graders, today these 14-22 year old gang members all have rap sheets riddled with assault, armed robbery and drug dealing charges.
Led by an ex-convict named Mo, Check It members are now creating their own clothing label, putting on fashion shows and working stints as runway models. But breaking the cycle of poverty and violence they’ve grown up in is a daunting task.
Life for the Check It can be brutal, but it’s also full of hope and an indomitable resilience. At its heart, CHECK IT explores the undying friendship that exists between these kids – an unbreakable bond that is tested every day as they fight to stand up for who they are in a community relentlessly trying to beat them down.
Time: Tue, 2017-12-05 19:00
Place: Mejeriet
Entrance: 80 kr (60 for students and seniors (pensionärer))
Trailer »
Den 30 november