Petition to Arrest Netanyahu If He Visits UK Likely to Increase to over 100,000
The issue is: what action will the British government of David Cameron take against the leader of a foreign state alleged by many to be guilty of war crimes?
Will it bring justice as in the case of Hosni Mubarak, Muammar Gaddafi and Saddam Hussein or will it continue to collaborate and collude in injustice for reasons of political and economic expediency?
The world watches as international opinion hardens. 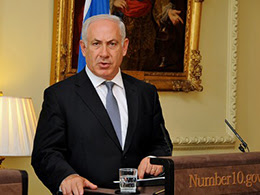 Petition: Benjamin Netanyahu to be arrested for war crimes when he arrives in London.
Den 20 augusti